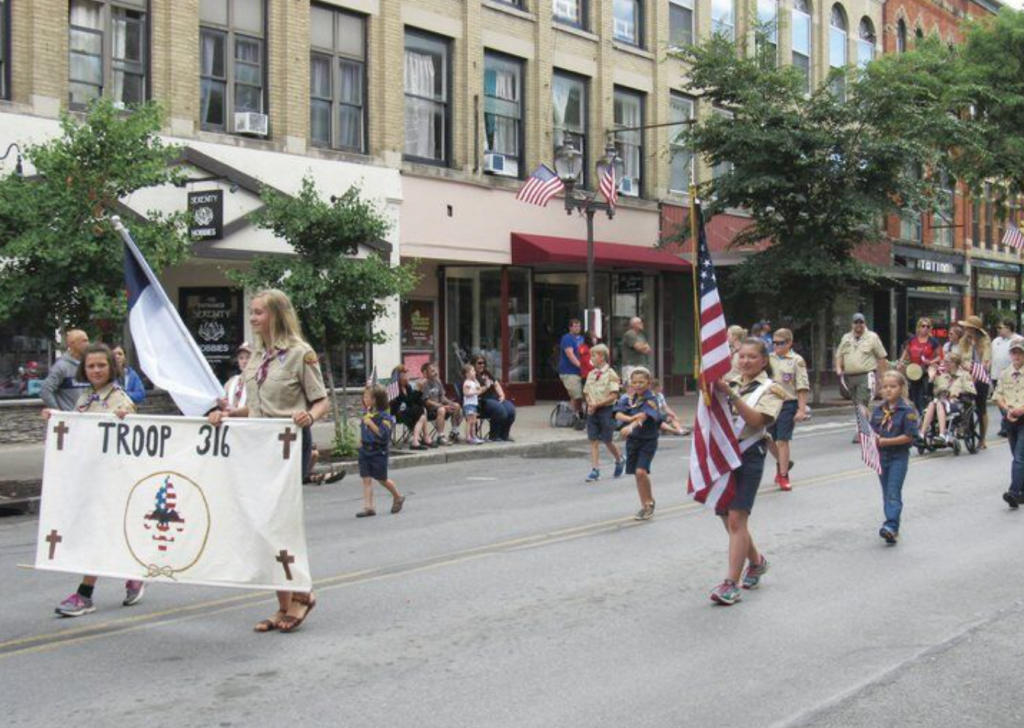 Children and adults were decked out in red, white and blue to celebrate the nation’s birthday and enjoy an old fashioned parade.

This year’s parade was 45 minutes long and saluted essential workers and first responders. Bassett Healthcare Network’s CEO Tommy Ibrahim was this year’s grand marshal and several doctors, nurses and hospital staff from Bassett Healthcare walked in the parade to the cheers of the audience.

Staff from the WellNow Clinic, Heritage at The Plains at Parish Homestead and Chestnut Park Rehabilitation & Nursing Center also marched in the parade. Essential workers from the U.S. Postal Service also marched.

The Pindars Corners, West Oneonta and Unadilla volunteer fire departments had trucks in the parade and the City of Oneonta Fire Department’s Ladder Truck was the parade’s caboose. The parade was led by the Oneonta City Police and the motorcycle club American Legion Riders, who are all veterans of the armed service. Members of the city police department marched and there was a New York State Police car and Otsego County Sheriff SUV in the parade for onlookers to cheer their occupants.

“The parade went wonderfully well,” said David Hayes, a First Night committee member. “It was so nice to see so many smiling faces. Kids were just beaming. It’s been a long time and it was great to experience.”

One of the highlights of the parade was an appearance by Anthony Eardley, who appeared on American Ninja Warrior on Monday, June 28. His float included some obstacles similar to ones in the television show including a warped wall and pipe slider. He performed some stunts while the float was stopped and also greeted children along the route.

Other highlights of the parade included performances by the Elite Dance Studio and the Oneonta Genbu-Kai Dojo at the emcee’s booth in front of Muller Plaza and DrumQuest allowing people to bang their drums along the route.

Events were also held in Neahwa Park, with fireworks scheduled for that night and an afterparty with Cosmic Karma Fire Spinners. The event was presented by Five Star Subaru and First Night Oneonta.