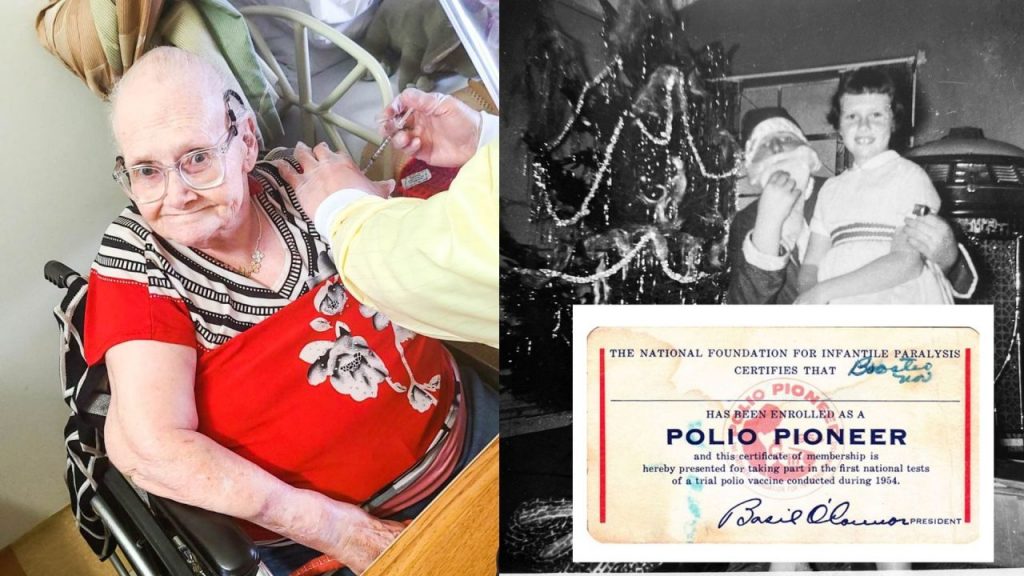 Mentel received the Pfizer-BioNTech vaccine on Wednesday, Jan. 6, when the nursing home, located at 157-15 19th Ave., received its first shipment. Second doses are expected to be delivered in 21 days.

At the age of 6, Mentel was one of three students in her class to receive the polio vaccine, as it was still controversial. Now, Mentel is proud to be receiving the COVID-19 vaccine and hopes to be an inspiration to other nursing home residents who may be nervous.

“We took a series of three shots and I received a certificate that called me a pioneer,” Mentel said in a video. “Just as we wiped out polio, I hope we wipe out COVID-19.”

Mentel was born in Queens, but was living in Providence, Rhode Island, when she received the polio vaccine. She was deemed a “Polio Pioneer” from the National Foundation for Infantile Paralysis (now known as March of Dimes).

Mentel says she has hope for a better future and can’t wait to hug her daughter, Sue, once again. When asked to write down who she got vaccinated for, she immediately jotted down her grandson’s name: Mathew. Both Sue and Mathew live in Forest Hills.

During a video call, Sue was excited to hear that her mother received the vaccine.

“I’m so happy! That is the absolute best news I’ve heard in many, many months,” Sue said. “Thank you to everybody at The Grand. I am so excited. I’m hoping all of the staff gets vaccinated, and I hope everyone gets a moment to feel a little empowered.”

Shelley Serber, creative director at The Grand Healthcare System, said Jan. 6 was an “absolutely monumental day” at the nursing home.

“It’s been a long few months for us and to receive the vaccine and to see joy in staff members and residents’ faces, it was incredible,” Serber said. “There wasn’t a dry eye in the room, and it’s a day I will never forget.”

In December, residents and staff members at nursing homes across New York state began receiving the COVID-19 vaccine during the first phase of the vaccination process.

According to Gov. Andrew Cuomo, 611 facilities in New York have enrolled in the federal government’s Nursing Home Vaccination Program, in which staff and residents receive vaccinations through a partnership with pharmacies like CVS and Walgreens.

According to the latest data, 288 facilities (or 47 percent) have completed the first dose for residents. Through state facilitation, 234 more facilities will administer the first dose during the week of Jan. 4.

This will ensure that 85 percent of facilities have administered the first dose to residents by week’s end, with the remaining 15 percent to be completed over the next two weeks.