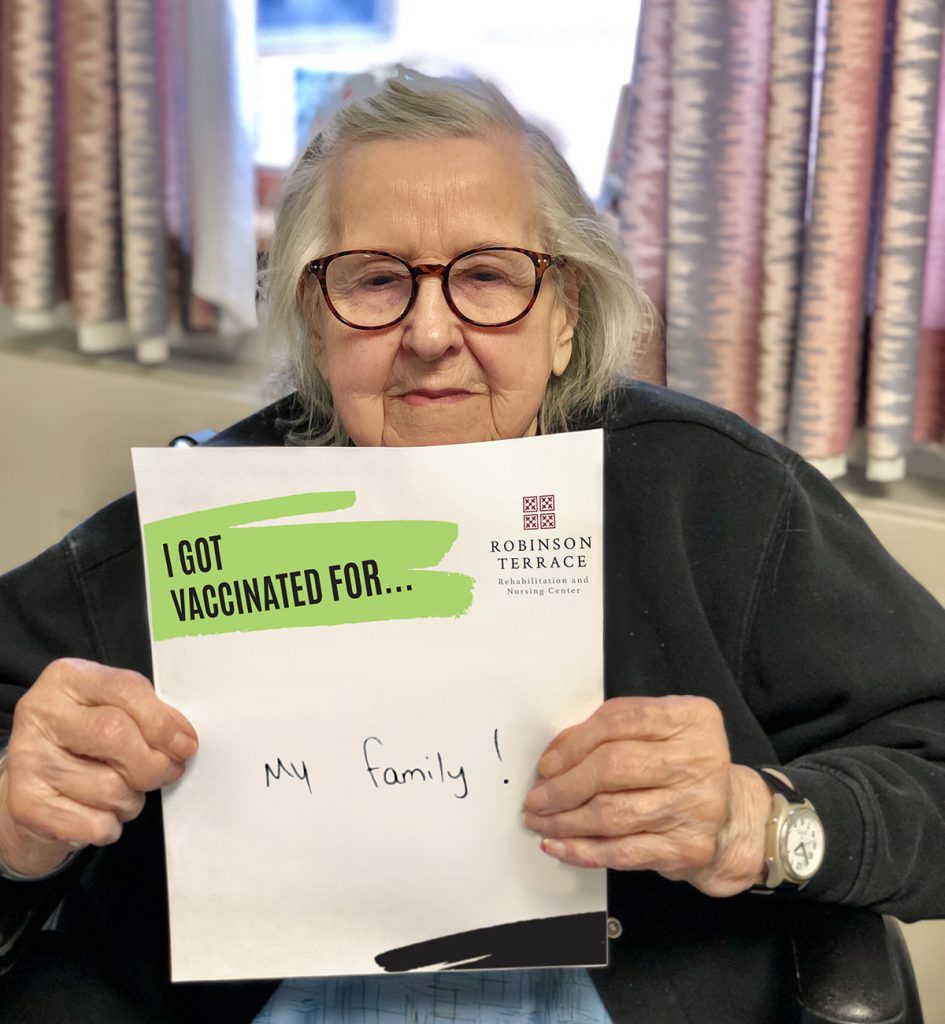 Contributed Robinson Terrace resident Edith Holmes, 97, of Richmondville, holds a sign declaring she got vaccinated for her family Wednesday, Dec. 30, after receiving the COVID-19 vaccine at the Stamford assisted living facility.

More than 100 residents and staff at Robinson Terrace Rehabilitation and Nursing Center in Stamford received their first doses of the COVD-19 vaccine Wednesday, Dec. 30.

Describing the vaccine clinic as a “great success,” Robinson Terrace administrator Mike Brown said, “I think many more would have been as well, but there were only a certain amount of doses allotted for the facility on the first date. It was based on the total number of residents and staff that had consented.”

“We did see a big increase in those that consented on the day of the clinic after previously having some reservations,” he continued. “I believe when individuals see their peers or colleagues’ excitement to get the vaccine, they changed their mind.”

Edith Holmes, a 97-year-old Robinson Terrace resident from Richmondville, said she got the vaccine for her family.

“I want to be able to see my children and get close to them again,” she said. “The pandemic makes me mad, terribly mad. I haven’t been able to see my kids.”

Holmes said she was “incredibly pleased” that the state prioritized assisted living facility staff and residents in distributing the vaccine.

Asked if the vaccine gave her hope for the future, Holmes said, “God, I hope so!”

Holmes said she values the solace she finds in the books sent to her through the Albany Library while trying to pass the time in isolation.

“They keep me busy,” she said. “We can’t have group activities anymore, so I look forward to better days.”

Brown said Holmes and her fellow residents “share the general feeling of hope that the vaccine brings.”

“With the vaccine becoming widely available in the near future, the thought of returning to ‘normal’ is on everyone’s mind,” he said.

The state imposed stricter regulations for skilled nursing and assisted living facilities than the community at large, Brown said.

“These are for the protection of our residents but they come at a great cost — individuals can’t visit too closely, no hugs or kisses from their grandchildren, beautician services have been limited, and group activities such as bingo, community bands, or field trips have been on hold,” Brown said. “Hope is the general consensus — we are all incredibly hopeful that the vaccine will significantly reduce the transmission of this invisible threat to the point where our doors are open to all visitors and masks are only worn on Halloween.”

The second group will receive their second dose Wednesday, Feb. 10.