On the Bright Side: Old buddies reunite at Robinson Terrace after 50 years apart 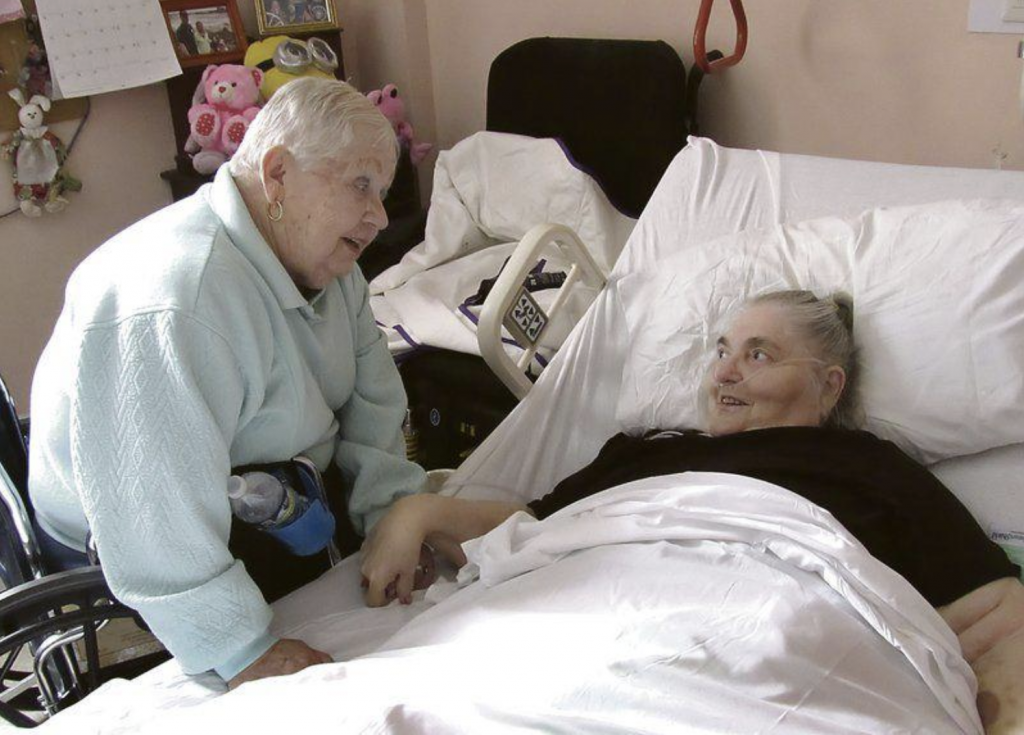 Shweta Karikehalli | The Daily StarAlida Bloodgood, left, and Coral Thornington-Roe chat in their room at the Robinson Terrace Rehabilitation and Nursing Center on Thursday, Dec. 5.

Before Coral Thornington-Roe and Alida Bloodgood were reunited at Robinson Terrace Nursing Facility, they’d been out of touch for more than 50 years.

“I said, ‘Oh my god, I haven’t had any trouble for a long time,’” Thornington-Roe said she exclaimed after seeing her friend for the first time in decades.

Thornington-Roe and Bloodgood, both 77, met on the school bus as seniors at Grand Gorge Central School, Bloodgood said. Their bond cemented quickly, and they had fun going on adventures with boys and “getting into trouble,” she said. “Let me tell you, we had a lot of fun and it was all legal,” Bloodgood added, grinning.

They said they would fill up Thornington-Roe’s car with 36 cents of gas — the perfect amount to drive around town. As best friends, they went on many double dates including during their high school senior year trip to Washington. Bloodgood went on one date with Thornington-Roe’s brother, but said they didn’t hit it off very well.

“I just kind of backed away nicely and so did he and we never saw each other again,” Bloodgood said.

The two were inseparable their final year of high school and then their paths diverged. Bloodgood moved to New York City for college and Thornington-Roe got married, with Bloodgood as one of her bridesmaids.

Over time, their contact waned. Bloodgood had to move back home to care for sick family members, she said. Though she said she thought of her friend often, life’s obstacles didn’t afford her any time to try and track her down. Coral was also busy raising a family.

“It’s a normal thing when you graduate, you grow away from your buddies,” Bloodgood said. “And it’s a horrible thing.”

Decades later, due to a serendipitous stove sale, the two were reunited. Thornington-Roe’s son happened to need the appliance, and Bloodgood was selling one, she said.

“He got a stove for nothing, I got the damn stove off my porch and Coral’s number to boot,” Bloodgood said. “What more could I ask for?”

The two started calling each other regularly, even joking about what it would be like to be at the same nursing home.

At the same time, Bloodgood said she was deeply unhappy at her nursing home at the time and wanted to leave. She said she was thrilled to learn that Robinson Terrace had a vacancy. After some time, Administrator Mike Brown asked the ladies if they wanted to be roommates.

“I knew it was going to be OK because she was here and I was here and we were together and we would be OK,” Bloodgood said.

Thornington-Roe and Bloodgood are now making up for lost time and rekindling a friendship which was nearly lost in the intervening years. Their dispositions complement each other. Thornington-Roe let her friend answer most of the questions and her laid-back, calm disposition complemented Bloodgood’s conviviality. The two lovingly poked fun at each other, joking over who could beat the other in a wheelchair race.

The two enjoy playing bingo and the occasional perambulation around the nursing home. And though several decades have passed since they were high-schoolers, the duo still has a reputation for being trouble.

“They know us when they see us,” Thornington-Roe said.

They also helped each other through times of uncertainty at the nursing home. Whenever Thornington-Roe has a hard night, Bloodgood wheels over to her bedside, holding her hand, rubbing her arm and letting her cry it out. When Bloodgood is missing her husband, Kenney, in between his visits, she said her best friend’s presence helps ease the pain.

“I’m blessed that she’s here because she is part of my life, a very integral part of my life,” Bloodgood said. “If she wasn’t here I don’t think I would’ve made it this far truthfully.”