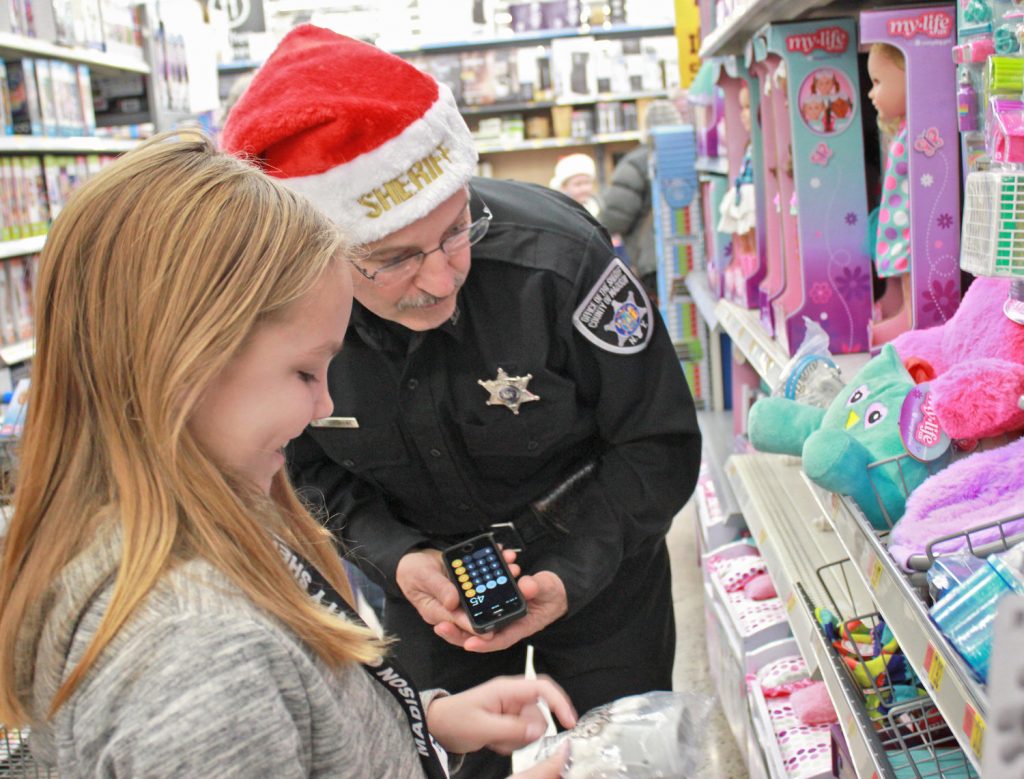 ONEIDA — The Madison County Sheriff’s Office was out in force Saturday taking 33 kids on a shopping spree for the second annual Shop with a Sheriff event.

Three children were chosen from each school district in Madison County and given $150 to spend at the Oneida Walmart. Members of the Madison County Sheriff’s Office raise money through their No-Shave Fundraiser. Everyone participating in the fundraiser grows their facial hair out and pays a monthly fee.

“Among the jail and the road patrol, we raised around $8,000,” Investigator Frank McCully said. “Last year, we had 18 kids — two kids from every school district. Christmas is all about the kids. It’s about the magic of Christmas and Santa Claus.”

McCully said through Shop with a Sheriff, the sheriff’s office can help children and families who may not be as fortunate or who have gone through something traumatic this last year.

“The school district recommends the children to us and we reach out and invite them here,” McCully said. “This event is all about them and giving back to the community.”

“I did Shop with a Sheriff last year because it’s important for the sheriff’s office to give back to the community,” Duchene said. “This is just one way can do that. We want to help these children’s Christmas be just a little brighter.”

Madison County Sheriff Todd Hood echoed Duchene’s sentiments and said it’s all the hard work of the deputies that makes it possible, from the fundraising to the footwork.

At the end of Kiernan’s shopping spree, she had a new doll, accessories, a couple of playsets and a massaging foot spa.

“I loved it,” Kiernan said. “I think sheriffs are amazing because they save the world.”

Kiernan’s father, Lowell Berger, said the family has been going through hard times as of late and appreciated the help of the sheriff’s office.

“Things like this bring the community together and give the kids a good time,” Berger said. “There are some kids who aren’t fortunate enough to even have a Christmas and this helps them out. It also helps show that police and the sheriffs aren’t bad people. They’re humans, just like we are, doing a job.”

While children are encouraged to shop for themselves, others have their family and friends on their Christmas list. To help the gift-giving experience, the Grand Rehabilitation and Nursing in Chittenango had two volunteers on hand to help wrap presents. The Grand also held a drive and provided all wrapping paper for the sheriffs.

Cuda and Lewpinski were both impressed by how thoughtful Maddox was being after he loaded up his shopping cart with gifts and only one thing for himself.

“He’s so thoughtful and thinking of others before himself,” Maddox’s grandmother, Janice Hill, said.

After the last child had been taken care of and sent on their way with a pile of gifts, thoughts turned to next year.

There had been talks between the Madison County Sheriff’s Office and Oneida Police Department to combine both Shop with a Sheriff and OPD’s Shop with a Cop, but the logistics proved too much. McCully said with a possible 100 children to shop for and both departments at the store, it proved too much.

“We’re not opposed to it, it just has to logistically work,” McCully said.

Until then, the Madison County Sheriff’s Office plans to make Shop with a Sheriff a tradition.

“As long as I’m here in Madison County, this is going to stay,” McCully said.