Responding to a call for enhanced cardiopulmonary care in the Hudson Valley, The Grand Healthcare System, one of New York’s leading healthcare companies, announced the opening of The Butch Anderson Cardiopulmonary Center in Poughkeepsie, N.Y.

Located at 140 Main Street, within the Grand Rehabilitation and Nursing at River Valley, the 12-bed center will offer those who have experienced a heart attack, bypass surgery, cardiac or lung surgery, or various other heart or lung disease complications, the latest in medical, nursing and therapeutic technology, while focusing on the activities of living such as walking, dressing, eating, and communication.

“In speaking with administrators at area hospitals, we learned that there is a need for greater regional cardiopulmonary care,” said Jeremy B. Strauss, CEO of The Grand Healthcare System. “We talked about the opportunity and identified it as being something that we were able to deliver upon, since we are always looking to expand the scope of rehabilitation services that we offer.”

The center is named in honor of Dutchess County Sheriff Adrian “Butch” Anderson who has worked for the Dutchess County Sheriff’s Office for more than 40 years. Starting out as a deputy and later serving as a detective, he continued moving up the ranks until he became sheriff in 2000. However, Anderson’s lengthy law enforcement career could have been derailed at an early age. When he was just 38, Anderson was told he needed open-heart surgery. The new procedure had riskier odds but greater chances for survival if successful. Anderson allowed himself to be a “guinea pig” and elected to go with the experimental procedure. He credits the role rehabilitation played in enabling him to get back on his feet and tackle life’s challenges.

The Butch Anderson Cardiopulmonary Center will give patients access to a team of professionals in all phases their recovery, including education, nursing, nutrition, occupational therapy, physical therapy, recreation, social services and speech-language therapy. Daily exercise groups, nursing rehabilitation and support groups, which provide valuable information and a chance to meet others experiencing similar life changes, are also offered.

The Grand Rehabilitation and Nursing at River Valley has partnered with local cardiology and pulmonology practices to provide the highest level of care for its new cardiopulmonary patients. Physicians from these groups will round on a weekly basis with The Grand’s clinical team.

“Our goal is to get people better so that they can go home to their loved ones,” said Dan Muskin, regional vice president, The Grand Healthcare System. “Toward that end, we will focus on teaching residents how to rely on their strengths to compensate for functions that may have been compromised. Our therapists will work towards optimizing physical function using individualized exercise programs tailored to each resident’s quality of life goals.” 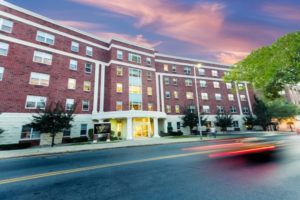